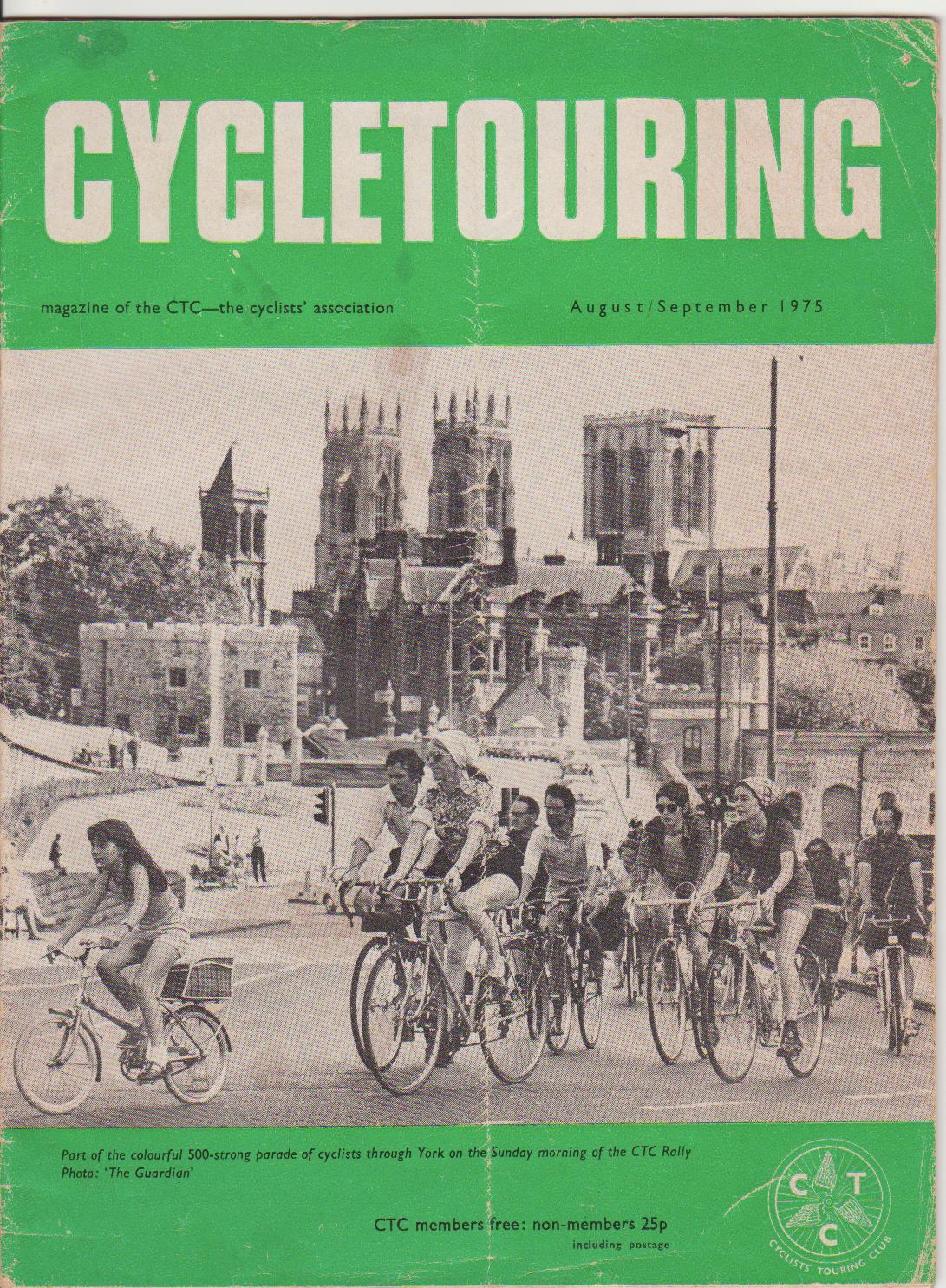 Many thanks to our Event Co-ordinator Paul Reid, who unearthed three copies of early CTC magazines which featured items about the Rally, from 1949, 1962 and 1975.

Without further ado, here they are – enjoy! Apologies for the poor scanning on some of them:

More scanning! We’re back in 1963, with a major road race running from London to York, and ending in front of the crowds at the Knavesmire: 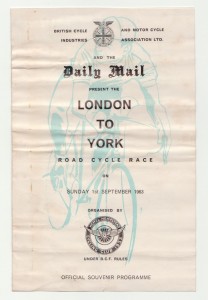 The full programme shows a list of entrants, prize money and an (unfortunately not very legible) list of officials and supporters: 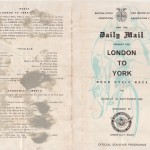 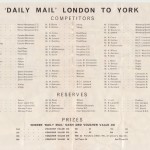 1963 London to York race inside

Most interesting perhaps is the route:

Not sure it’d be so easy to arrange a race up the A1 today!

We also have a clipping from (I assume) one of the cycling mags of the day: 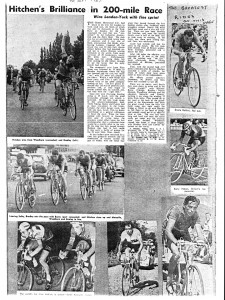 One day, perhaps, we’ll attract a race finish back to the revived Rally!

Committee member Dave Bishop has been preserving an archive of York Rally materials for over half a century, and he’s kindly made it available for the new Rally website. So I’ve made a start on the scanning, with a look back to the 1960s. Click any image to enlarge – and I have the original scans at twice this resolution for the archives.

We’ll start with the Rally pennant for 1960: 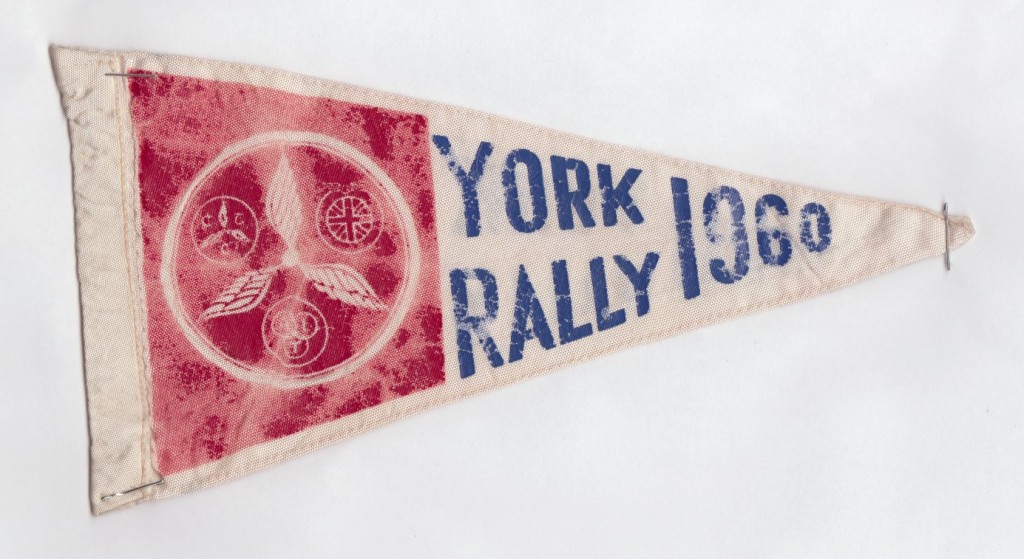 and the design was little changed for 1961: 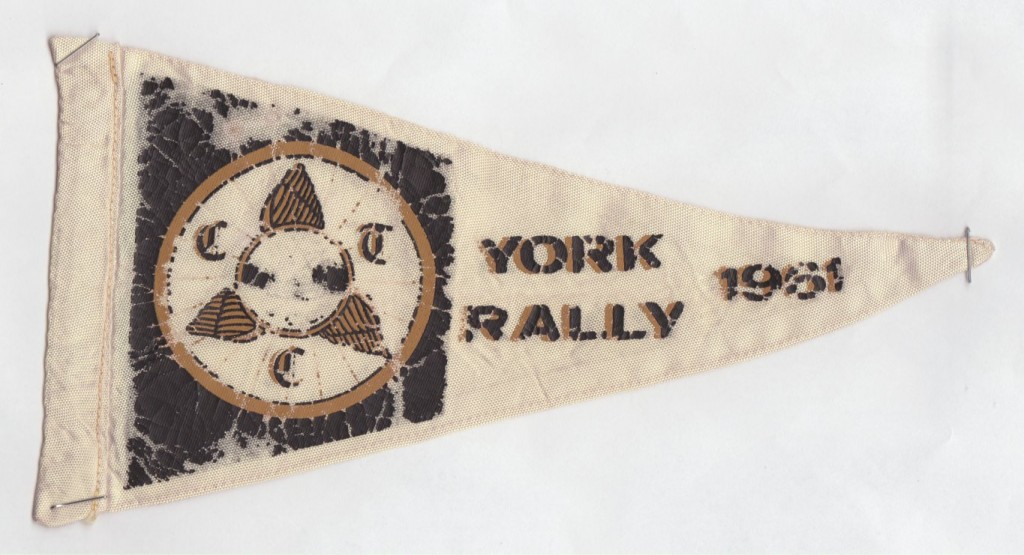 For 1962, however, the pennant had changed orientation and added ribbons: 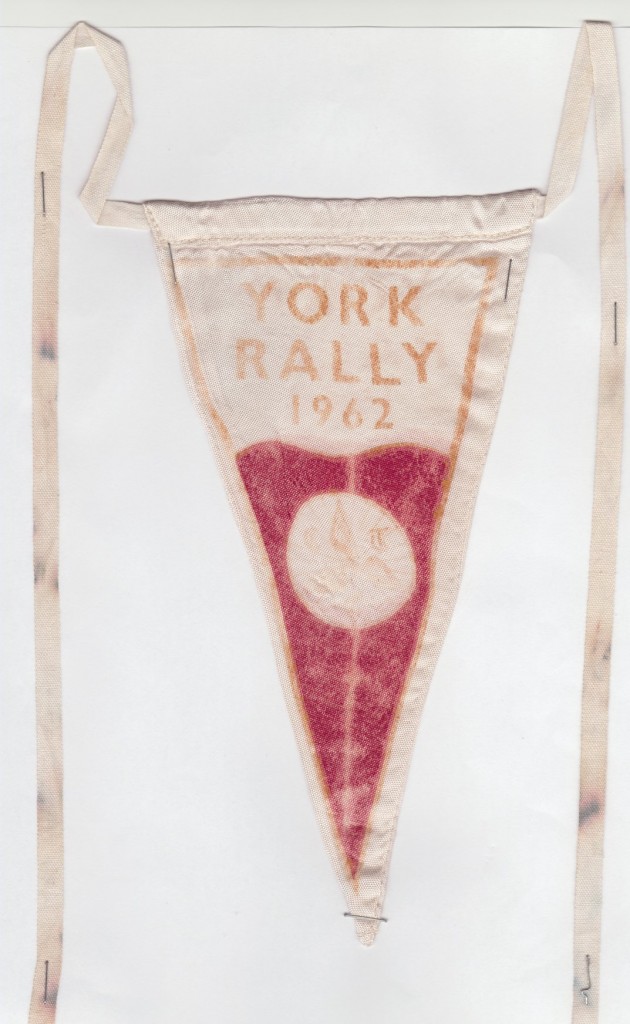 That’s all the pennants we have for this decade.  Unfortunately, even after our previous article on the subject we still don’t know much about these Rally pennants. Who designed them? Where were they flown?

Anyway, onwards to 1963, and the show programme! 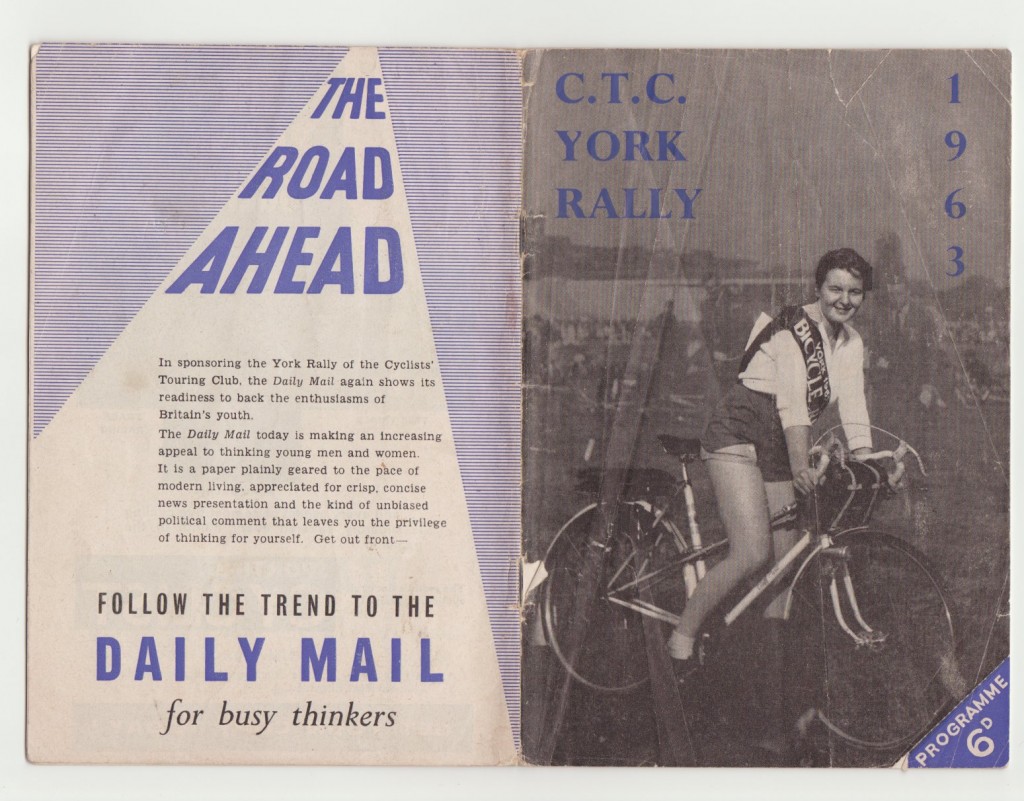 Note the sponsorship and back cover advert from the Daily Mail – an illustration perhaps of the national significance of the Rally in its heyday.

So far I’ve just scanned covers and the centre pages of the show programmes – there might be a copyright issue if I reproduced the whole publication. Also, to preserve Dave’s copies it’s nice not to force every page flat onto the scanner. So this was at the middle of 1963’s programme: 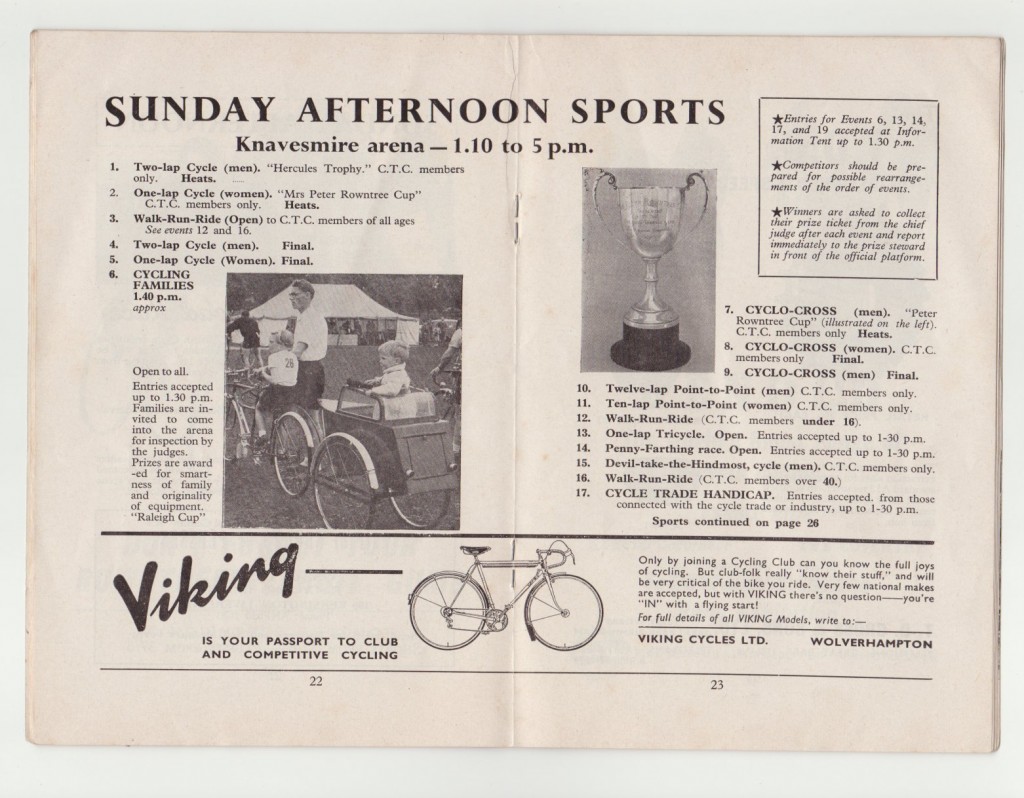 The preceding pages show the event schedule, leading up to this spread all about Sunday afternoon.  The picture, with a child in what looks like a nicely crafted cycle trailer, is presumably from the ‘Cycling Families’ event at 1.40pm. “Families are invited to come into the arena for inspection by the judges. Prizes are awarded for smartness of family and originality of equipment.” One to revive for 2015? 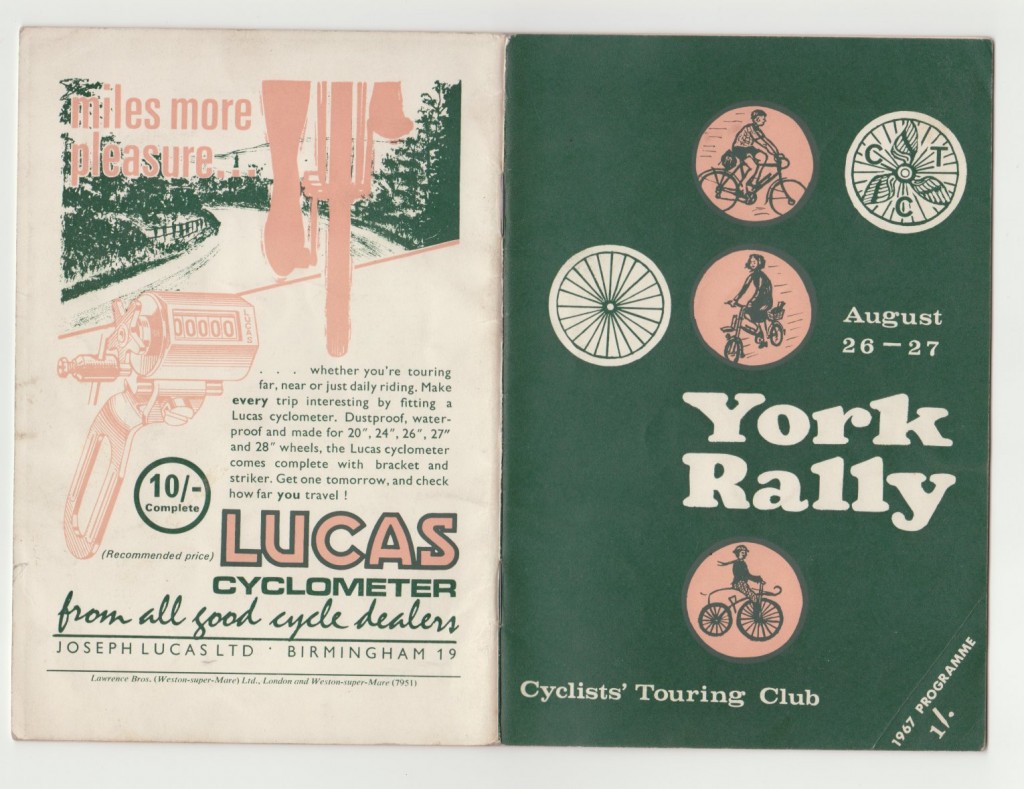 Cycle computers have perhaps moved on a tad since the Lucas Cyclometer was being advertised… chapeau to the graphic designer, too, for a striking cover layout. And inside on the centre pages we have: 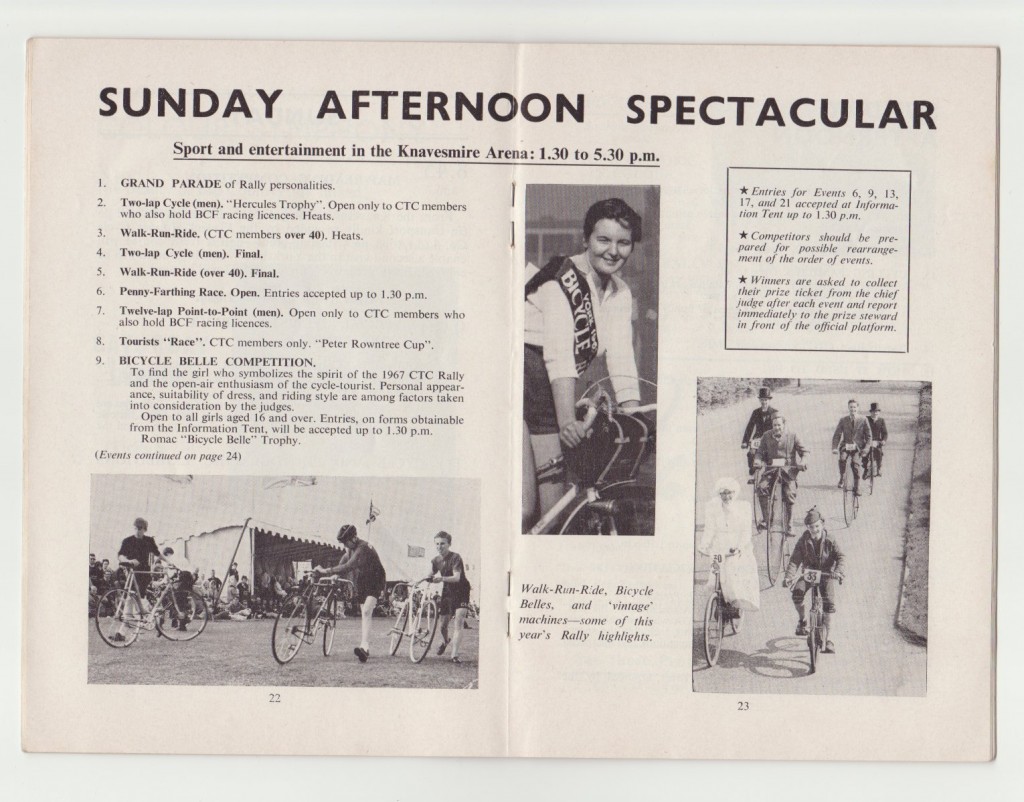 a ‘Sunday Afternoon Spectacular‘ no less! The ‘Cycling Families‘ event has been replaced, I note, with the ‘Bicycle Belle Competition – to find the girl who symbolizes the spirit of the 1967 CTC Rally and the open-air enthusiasm of the cycle-tourist.  Personal appearance, suitability of dress and riding style are among factors taken into consideration by the judges.” Not really appropriate for 2015, I think most would agree.

Our final item from the ’60s is this envelope dated 1969, which contains just a subscription reminder. I’ve blurred the recipient address on this web version – it’s not inconceivable that it’s still valid. 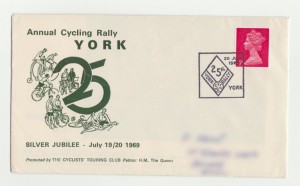 More lovely artwork – and note how even the postmark promotes the 25th ‘Silver Jubilee’ Rally!

Thanks to Dave Bishop who brought these splendid pennants along to the last meeting, and for Paul Reid for letting me use his camera for the images. I’ll try to find out more from one of our historical experts.

Where were these pennants flown? Who designed them? Does a complete collection exist anywhere? 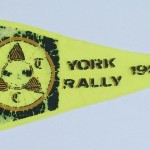 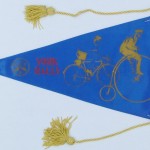 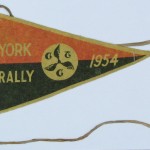 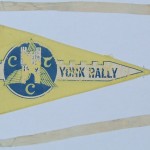