A number of organisations have now expressed an interest in staging races or displays on the permimeter track on the Knavesmire during the 2015 York Rally – this would be great to see!

The track is a consistent 3.2 m wide (10′ 6″), checked in several places around the course. The length available for racing is around 1.59 miles (about 2.56 km) starting from near the main site entrance. If the start is placed just after the Cherry Lane entrance at the far side of the course, then there is 1.08 miles or 1.74 km available.  Maps and distances via the excellent gmap-pedometer.com: 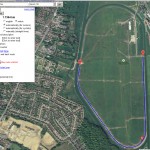 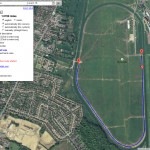 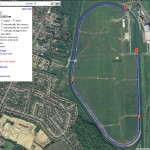 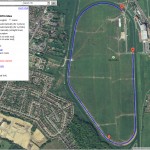 To give potential event organisers a better idea of the track I nipped out today between some heavy showers and took this video: watch in HD for best quality (and you may as well turn sound off – it’s mostly just wind noise):

And as Vimeo keeps giving me errors on playback here it is via Youtube, too:

We are fairly certain that the works obviously in progress  in the video (especially just before the Cherry Lane entrance) will all be completed well before the Rally in June 2015, and the piles of soil spilling onto the track will be gone by then too.

The only slightly awkward bit for racing machines might be the soft crossing just after the Cherry Lane entrance. We’ll check with the racecourse as to whether that will be removed before June, to leave firm track, or not. In any case, even if starting races just after this, there’s a clear mile of track to go, plus around 140 yards of the finishing straight left over as a slow-down zone.

I also took a series of photos as I went around – the details are in the captions: 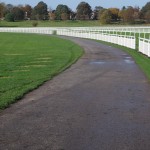 View from just past the main site entrance from Knavesmire Road. 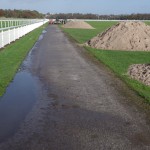 The works just before the Cherry Lane entrance 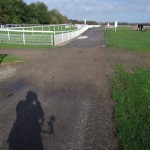 The soft surfaced crossing just past the Cherry Lane entrance. No problem for fat tyres but hard skinny ones might cut into it a bit. 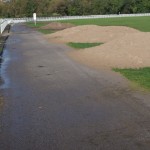 Piles of sand on the far straight spilling onto the track a little. 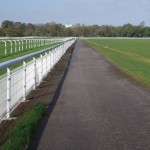 Looking back up the far straight. 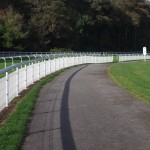 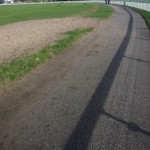 On the final bend there’s a sandy section which has resulted in some sand on the track. If still there in June, might be an idea to give it a quick sweep before a race. 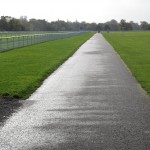 Looking back up the finishing straight. 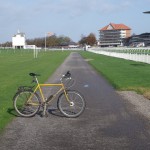 The finishing straight with my bike for scale. 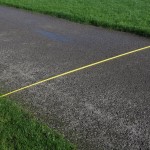 I measured the track in several locations… 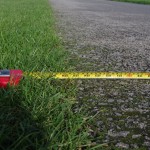 If anyone wants any further details – or pictures/video from a dry day nearer the time – please just let us know.

We could also check the distances more accurately if necessary using one of those wheel-type surveying devices, as one of our Committee has access to one – seen here in action surveying the grass track area last week! 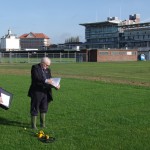 Checking out the Knavesmire to determine the best location for the grasstrack racing – early October 2014.