Vintage cycle displays, with expert enthusiasts on hand to explain, were a highlight of the 2015 York Rally: Photo Liz O’Sullivan

Trying out a tall bike at the 2015 York Rally: Photo Pat Douglass

Out on a ride at the 2015 York Rally: Photo Robert Johnstone

The Foresters play live at the York Rally in 2015. Photo: Malcolm Carline

A visitor all the way from Germany had brought his home-built quad and trailer to the Invention Convention at the York Rally 2015. Photo: Malcolm Carline

Racing recumbents were on display at the York Rally 2015 thanks to the British Human Power Club. Photo: John Jackson

A quiet moment at the 2015 York Rally: Photo John Jackson

A ride heads out at the 2015 York Rally. Photo: Peter Eland

The York Rally is coming up fast on the 18-19 June 2016! All are welcome on York’s Knavesmire. Entry, parking and almost all activities and rides are completely free! Find out what’s on here and all the practical details are here. And watch our Facebook page for latest updates…

The York Rally is a volunteer-organised grand weekend of cycling which has been held almost every year since 1945 on York’s Knavesmire. After a brief hiatus it was revived in 2015 with the help of numerous supporters, volunteers and enthusiastic cyclists. Read all about the first revived Rally in the 2015 York Rally report.

For anyone wishing to make a weekend of it, there is a large campsite on site, and you are welcome to just turn up and pay on the day! More details here. 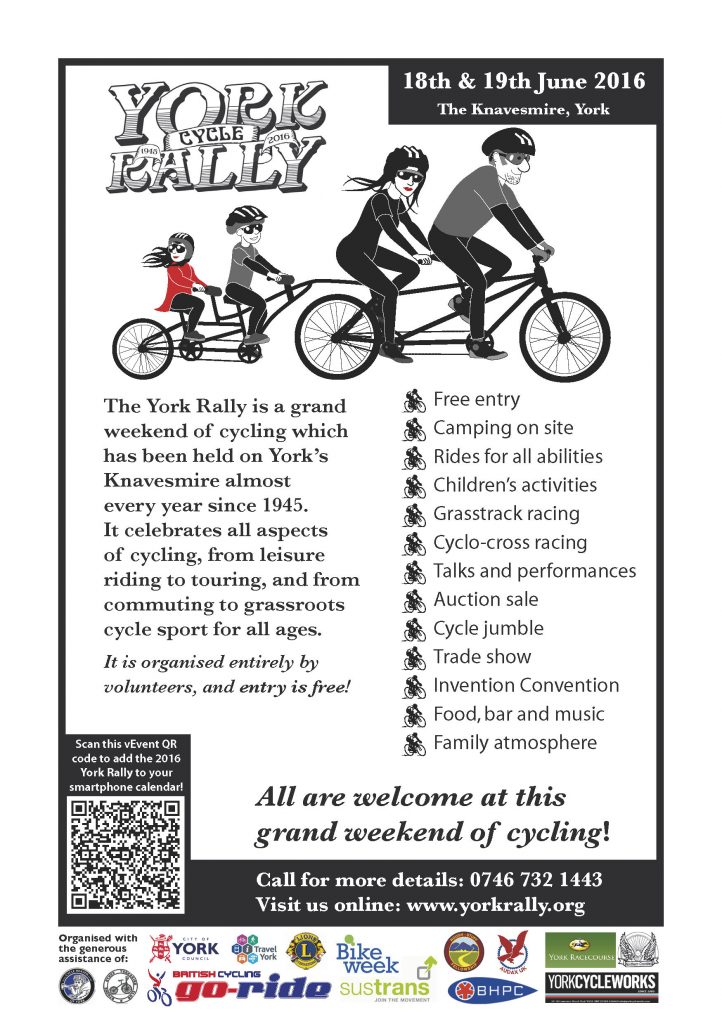 You are also very welcome to sign up for our email newsletters for the latest about the Rally – we’ll keep them occasional, on topic and will never pass on your email address to third parties. An archive of previous newsletters is here and there’s an unsubscribe link on every email we send, so you can remove yourself from the list at any time. To sign up, please just enter your email address below: