The press release is out! And I’ve just had a call from the York Press: watch out for a story on Friday…

Ride Yorkshire for the Rally!

Legacy and history combine in this spectacular Yorkshire ride to support the revival of the York Rally. 70 years of cycling heritage will be reborn in York, one year after the Tour’s incredible visit.

In July 1945, heady with post-war excitement, a gathering of cycling enthusiasts from clubs across the North of England made a momentous decision: to hold a rally “in or near York”. The title of the event was to be “The Grand All-Yorkshire Cyclists Rally”.

So on a Sunday in September 1945 the very first Rally was held on York’s Knavesmire, a sociable gathering of the northern cycling associations which soon developed into the main annual meeting-point for cyclists across the UK and beyond. The event was repeated for 68 years, as the CTC York Rally, and more recently as the York Cycle Show, until its temporary demise in 2013.

70 years on, today’s cyclists are not prepared to let the Rally die.

A group of volunteers has formed to revive the Rally for 2015. The 2015 Rally will build on the fantastic legacy of the Tour de France 2014, whose second stage started right at the Rally’s traditional venue, York Racecourse on the Knavesmire in York.

The York Rally 2015 will take place on the 20-21st June on the Knavesmire, and annually thereafter, continuing the tradition of fellowship and the joy of cycling embodied by the post-war founders. The new committee will also bring fresh ideas to keep the Rally sustainable for the decades to come.

The new Rally is still taking shape but it will aim to attract cyclists and potential cyclists old and new, and it will be a wonderful opportunity for those new to cycling to share in the unparalleled depth of cycling experience among the Rally regulars.

Cycling clubs, associations, online cycling forums and social media groups from across Yorkshire and the UK are warmly invited to attend, and to take full advantage of the almost unlimited space available on the Knavesmire to showcase their activities, and to come together with their members in a ‘Grand All-Welcome’ cycling meeting. Cycle trade exhibitors will also be made welcome.

To support the re-launch of the event, the organisers are staging the York Rally Grande Classic Sportive in September through spectacular North York Moors scenery. There is a choice of rides:

All proceeds from the event will be used towards staging the York Rally. Entries are open now on the British Cycling website:
https://www.britishcycling.org.uk/events/details/114853/York-Rally-Grande-Classic

Full details can also be found at the new York Rally website: www.yorkrally.org where supporters of the event are also invited to participate in the re-launch by becoming a ‘Friend of the York Rally’. All are welcome with ideas or to volunteer to help: details are on the website. 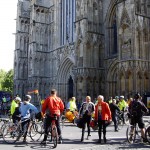 1953: Una and Kathleen Riley on TT on way to York Rally. Kindly provided by Martin Purser of the Tricycle Association. 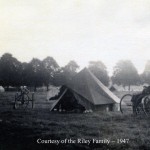 1947: Knavesmire camping circa 1947. Kindly provided by Martin Purser of the Tricycle Association. 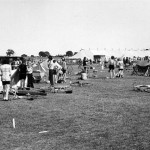