Of the many rides we’re running from the Rally, one is especially unusual! Jointly organised by Sustrans and the Invention Convention, it takes participants over to York’s new Sports Village, with its Olympic-standard outdoor velodrome.

Now most top class velodromes are strict in only allowing fixed wheel bikes onto the track. But for this ride only the organisers, working with the British Human Power Club, have arranged for all comers to be able to have a go! If you bike is safe you can ride – tourers, tandems, folding bikes and more. Here’s how the organisers describe it:

We’re aiming to get the widest variety of bikes ever seen together on a velodrome.  Most velodromes only allow fixies to ride, but York Sport have agreed to let us try all sorts of bikes on their brand new track!  Whatever machine you pedal, come and have a go; if our Marshals agree you and youer your bike are safe, its off you go… BHPC members get the first hour to show off their machines, and from then it’ll be organised mayhem!  We want to see all bikes on the velodrome, from penny farthings to BMX, from unicycles to faired hpvs.

There is a £5 fee to ride on the velodrome (free to BHPC members), payable in cash on the day. Free to watch!

There’s a new poster, too, which also gives an Invention Convention update! Highlights include:

Visiting the Rally? Be sure to take a look! 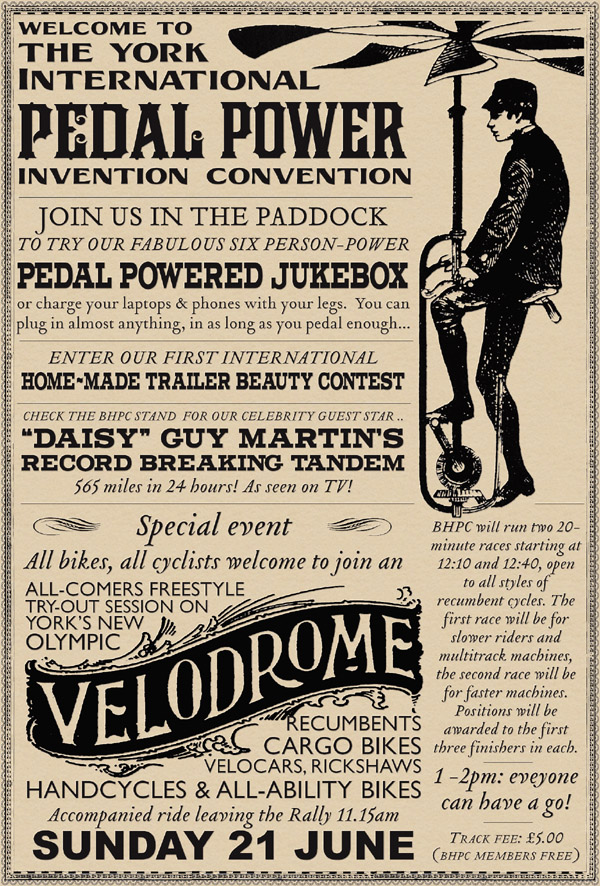