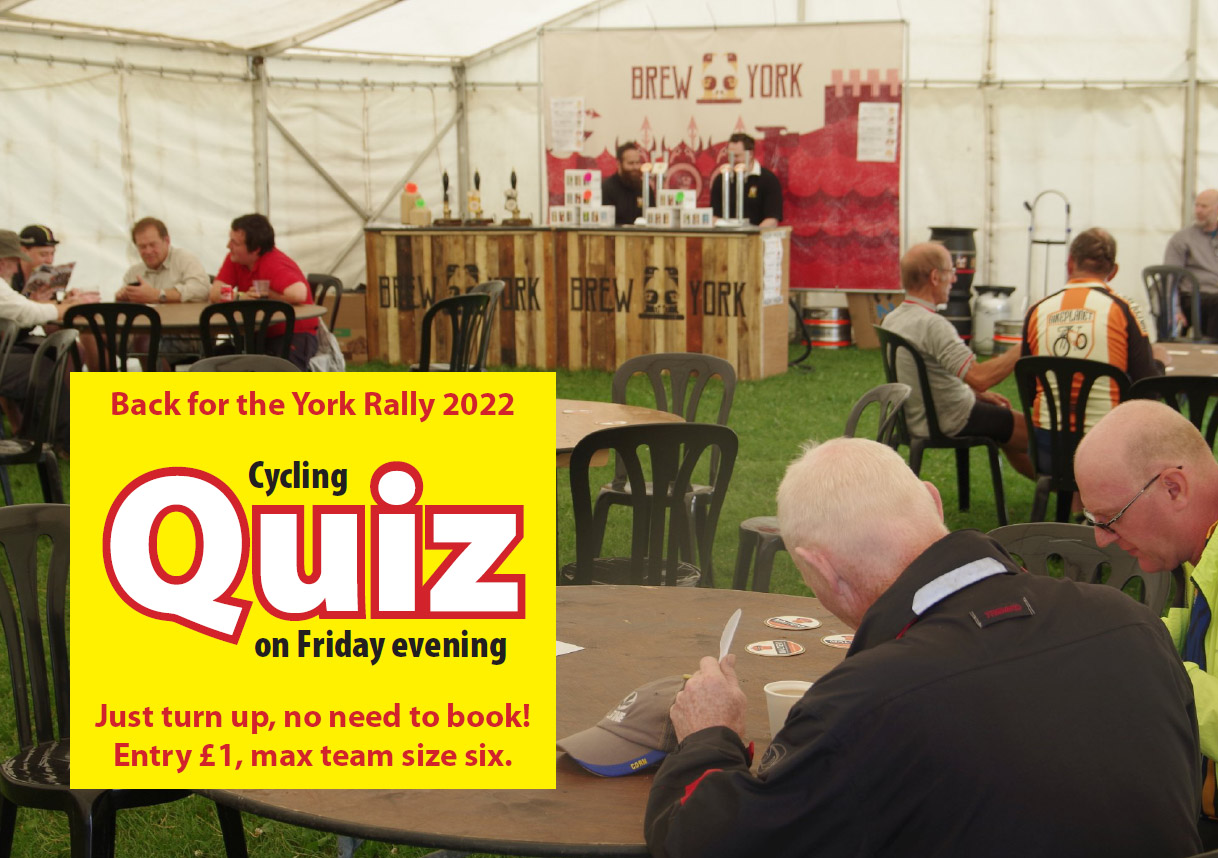 It’s just under a month until the York Rally! Campsite advance bookings close soon – plus the Quiz is back in a more relaxed format, the Talks schedule is taking shape, and a heads-up on works and diversions affecting major York cycle routes…

The Quiz is back!

You’ve arrived on Friday afternoon, set up on the campsite (after it opens at 4pm), maybe had a bite to eat (the on-site catering will be open) – and after that why not come to the bar area and join the Quiz?

After its debut in 2019 we’re revamping the format this year to be more relaxed – so just turn up in the bar area from 7:30 pm and it’s £1 per person to take part, with max. six in a team. Quizmaster Ian Prince will have a set of cycling-related questions pitched at an accessible level, and edible and drinkable prizes!

We’re already at record numbers for advance bookings, and they’re still coming in. But bookings must close soon – so that our campsite team can allocate piches, keeping groups and friends together, and prepare the lists for fast-track check-in on the day. If you haven’t yet booked, please do before the 10th June! After that, we can’t take more advance bookings but campers are very welcome to just turn up and pay on the day – we won’t run out of space!

If you have any questions about camping, please do just drop a note to our friendly campsite team: campsite@yorkrally.org

Huge thanks to all who got in touch after the last newsletter to offer talks! We now have the schedule almost complete… you can see the full schedule here but here’s the headlines:

Please just come along to the talks tent in the main marquee to join any talk!

Visitors to the York Rally should be aware of works and changes on major cycle routes in and near York.

First, Terry Avenue in York (the riverside path which runs from the Millennium Bridge towards the city centre on the side of the river closest to the Rally site) is closed for long term flood prevention work. This closure will definitely be in place during the Rally. For many destinations in town you can just use the other side of the river, and there are signed diversions too. More details via the York Cycle Campaign here.

Secondly, the route north across Clifton Ings (on the NCN route to Beningborough Hall) has been diverted to a new path – see here for details.

Finally, and most seriously, the Sustrans NCN Route 65 from Selby to York, also known as the Solar System Route, or the York Greenway (and part of the Trans-Pennine Trail) may be closed at a stretch including the critical river crossing near York, the “Fisherman Bridge” as pictured below, between Bishopthorpe and Naburn.

We have been in close and friendly contact with Sustrans and they hope, but cannot guarantee, that works will be complete by the Rally weekend and the path will be open. But we must be aware that it could be shut to all traffic, with heavy machinery on site and no possibility of access even for pedestrians.

If this section is still closed during the Rally, it could disrupt several of our led rides, and of course inconvenience Rally-goers arriving or departing from the Rally by this route.

Our Rides organising volunteers are working hard to develop contingencies and to research the best possible diversions. If these are needed we will signpost them ahead of the Rally. Meanwhile, please just watch out for further updates.

We’re all looking forward to seeing everyone on the Knavesmire in June!